Wally and the Election

"Wally, you have a strange look in your eye," Tom Johnson said, looking up from his video game.

Wally Lim glanced at Tom for a moment with a conspiratorial smile, then stared off into space once again.

"Yeah, Gabe Espinosa said. "Is high school is gettin' kinda dull for you? It's been a while since our last prank."

"Hmmm," Wally replied, then, "What do you guys think about another little adventure?" Wally asked, turning to the other three members of the gang, Robert Saylor, Larry Urbano and Sarah Steiner.

Robert and Larry nodded in agreement.

"Well...," Wally said, waving a flyer he held in his hand. "School elections are coming up next month... ."

"Maybe we should run for office!" Gabe said.

"Yeah... I wonder what it would be like being school treasurer," Sarah added.

"Wait a minute," Larry said. "I think you've got something more in mind - don't you Wally?"

Ms. Stoneman was no longer the trusting woman she had been earlier in her acquaintance with Wally and his friends.

"You want to run for class treasurer?" she asked Sarah Steiner, doubtfully.

"Yes Ms. Stoneman. Could I get the paperwork for that?"

Ms. Stoneman opened a drawer and pulled out the paperwork, but held on to it.

"Is Wally Lim involved in this at all?"

"Yes, Ms. Stoneman. "He will be helping some of us run our campaigns."

Ms. Stoneman was immediately on guard.

"I promise that none of my materials or speeches will say anything about Jesus or Christianity."

"You realize that on this form you need to sign an agreement saying exactly that?"

"And you're a Christian, right? And Christians aren't supposed to lie? Right?"

"Right. Are you a Christian, Ms. Stoneman?"

"I most certainly am not!"

"Please don't change the topic. Here are the papers you need to fill out."

"Thank you, Ms. Stoneman," Sarah said, and started to walk out the door.

"Oh, by the way, Sarah. Did you say that more than one of you will be running for office?"

"Yes, Ms. Stoneman. Several of my friends will also be running."

Sarah left but Ms. Stoneman was still bothered. She would have to keep a careful eye on things.

Over the next several days Larry, Gabe, Tom and Robert also came in and got filing papers, and gave Ms. Stoneman the same story in response to her questions.

And the following week Larry came in to get his campaign signs and speech approved. The sign was a simple banner that read:

Ms. Stoneman examined each of his signs carefully. They were exactly the same. She read the campaign speech carefully... twice.

"No secret ink or anything that will pop out later?" she asked.

"You realize you must give the speech exactly as it is approved?"

"Hmm," she said, and reluctantly pressed the "approved" stamp to each of the signs and to the speech.

Later, the others brought their signs and speeches in. They were almost the same, their last names followed by their office, though Robert and Tom each had an extra line: "He's the One!" and "Our Leader." And even the speeches were similar -- standard campaign boilerplate.

Ms. Stoneman wasn't sure why she was bothered, but she could find no reason to object and stamped each speech and each sign as "approved."

The campaign posters began appearing around the school, ad Ms. Stoneman examined each one carefully, but could find no problem.

"Okay," Wally said one afternoon at Sarah's house, "tomorrow is the school election assembly, and that's where it gets fun."

Before school the next day Wally and Tom and Gabe and Robert and Larry and Sarah arrived early, and with a ladder began taping their campaign posters, one close beneath another, high on the wall of the auditorium.

At the election assembly that morning, the principal, Mr. Johnson, walked to the podium to give the introduction. He looked around smiling, then froze when he saw the campaign signs for Wally's gang. 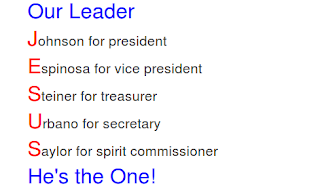 He looked at the signs. He was sure they were unauthorized, but he adjusted his glasses and looked closer. They DID have the school's permission stamp.

The students noticed his hesitation, and the direction he was facing. Those who hadn't already seen the signs looked over.

Students began to snicker throughout the auditorium and Mr. Johnson thought it best to distract their attention. He began his speech.

"Welcome to this year's Associated Student Body elections," he said, then stumbled distractedly through the remainder of his introductory remarks.

Then the candidates spoke.

As promised. Tom, Gabe, Sarah, Robert, and Larry each said exactly what they had written, and each ended his speech in almost the same way.

Tom pointed to his sign on the wall and said: "As my poster says, 'Johnson for president.'"

There was a low snicker from the audience as the students looked over and read, "Our Leader, JESUS, He's the One!"

Then Gabe ended his speech by pointing to his sign: "As my poster says, 'Espinosa for vice president.'"

The snickers grew louder. "Ooooh," they thought with glee. "These guys are going to get in trouble."

Sarah pointed to her sign: "As my poster says, 'Steiner for treasurer.'"

The students were enjoying this immensely. Not because many of them were Christians, but because they enjoyed watching people buck the school's authority.

Larry pointed to his sign: "As my poster says, 'Urbano for secretary.'"

And finally, Robert pointed to his sign: "As my poster says, 'Saylor for spirit commissioner.'"

"Woo! Woo!" Students yelled and clapped and cheered, even though they weren't sure these were the best candidates. They just enjoyed watching a fellow student get away with something, or, even sweeter, maybe they wouldn't get away with it.

The five candidates and Wally stood in front of Mr. Johnson's desk.

"Wally, I know you instigated this, but I can't prove that. However, I have plenty of proof against the rest of you - fifteen hundred students worth of proof! I am going to suspend each of you for three days!"

"High School Suspends Five ASB Candidates," Wally said, moving his hand across the air as if following a banner headline. "I'm sure the newspaper will want to know all about this! I'll call them right away! Big news! Maybe you'll be famous, Mr. Johnson!"

"Maybe we'll all get our pictures in the paper, or on TV! Oh, wait! I'm not suspended. Could you suspend me, too, Mr. Johnson?"

"Well, Wally, it's, uh, not my intention to make this a reward, and I see that perhaps this is not an appropriate punishment. I think that maybe, instead of suspension, if each of you will just withdraw your candidacy I'll just let the whole matter drop."

"Thanks Mr. Johnson! You're the best."

"Wow! I was afraid I might actually get elected."

"Woo Hoo! I SO didn't want to be spirit commissioner!"

The gang walked out of Mr. Johnson's office laughing and talking, closing the door gently behind them.

And Mr. Johnson sighed, then chuckled forlornly, then put his head down on his desk and thought, "How much longer before Wally graduates?"

My new book, The Brotherhood, is now available on Amazon.
Sandy Kilburn, a reporter at a small-town newspaper in the American Midwest, encounters both a cult that is slowly and inexorably taking over the world, and his own failures and compromises.
Posted by Brad at 1/20/2012 08:48:00 PM No comments: