I recently read a book called "Men to Match My Mountains," by Irving Stone, about the history of the Western United States. Fairly good, but one thing that struck me as particularly interesting was the description of how the city of Anaheim, in Southern California, was founded.

The idea for the city, the book says, occured in 1857 to a group of Germans living in San Francisco who found the weather there a bit moist for their liking. (Obviously they were not looking for weather that reminded them of home.) So, 50 families each chipped in $750 to buy 1,165 acres in Southern California. They didn't all immediately move south, however. Instead, while they continued to live in the San Francisco area, they hired people in Southern California to divide up the land into 20-acre lots, build an irrigation canal, lay out a 40-acre town site in the middle, and fence in the community with willow trees. Then, when the vines began to bear fruit, the whole colony moved south to their new home.

But, because the properties were not identical in value, a committee assigned a value to each one, then the families drew lots for the properties. If they got a good lot, they paid the colony company extra money; if they got a poor lot, the company reimbursed them.

I know that founding cities still happens occasionally (developers sometimes create cities near existing population centers, for example), but the idea of getting a group of likeminded people together to invest in a town and then carrying it out so methodically is pretty cool. Also, I thought the system the Germans adopted was very wise; they stayed up north - presumably working at their regular jobs - while they created jobs for themselves down south, then, when things were up and running, they just moved in and started working. Worth thinking about if you're planning to start a city. ;-)
Posted by Brad at 4/28/2006 07:44:00 PM No comments:

Attending Church with a Rabbit 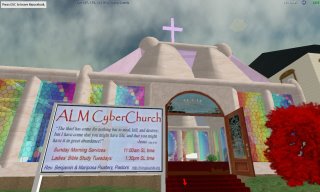 Last Sunday at 11 a.m. I went to a new church. It was in a large building with stained glass windows, there was a good sermon and great music, a few people wandered around, there was some whispering and giggling, people lifted their hands in worship or knelt in prayer. All pretty normal for a contemporary-style church.

However... in the congregation was a large pink rabbit, a fairie, a woman with large butterfly wings and a man who kept jumping 15 or 20 feet into the air.

What is this weird place and how did I get here?

Well, I had read about a cyberworld called Second Life, a beautifully designed online place that in an approximate way resembles reality. In this world people can construct buildings, wander around, fly (without an airplane), meet people and party - especially party. And, in wandering around, I discovered that probably a lot of the partying is way beyond my level of comfort.

Anyway, I wondered if there was a Christian presence in this "world." I poked around a bit and found that, indeed, there is, so last Sunday I rushed home from my own church and attended the ALM CyberChurch. It was really great! I was welcomed at the door; the sermon was excellent; there was a fellowship time in an adjoining room after church, and I felt I had been in God's presence.

I shared this experience with my real-world fellowship, and after discussing it I think we all concluded that - with some reservations - cyberchurch is a useful tool, but some folks were a bit afraid that it might draw people in so much that they don't attend a real-world church. And one man felt because you wear a cyberbody that people would find it harder to get to know the real you.

Here are my thoughts on these objections:

- I think that probably every advance in communications has raised the possibility that people will withdraw from face-to-face contact and rely on a communications tool for their spiritual life. I'll bet that in Gutenberg's day some people were afraid that printing and distributing the Bible would cause people to withdraw and take their spiritual nourishment from solitary reading. The same might be said of radio or television ministries. And, frankly, I think those people have a point. It is possible some people will prefer a cyberchurch to a real-world church.

I'd generally prefer people don't abandon real-world churches since a cyberchurch is only an approximation of real people getting together in real bodies to worship God - though in some cases I think a cyber-church would be better than attending a dead real-world church.

- On the question of people hiding behind masks in the cyberworld, I think that may be true, but I think it probably works both ways. While your real face and manerisms can reveal much of your inner self to a discerning observer, I wonder if people in the cyberworld, who can choose their own bodies, aren't in a way choosing a body they believe expresses their deeper self. Also, I'd ask if the anonymity of the cyber-world doesn't make people feel a bit safer to reveal their inner selves since nobody need know who they are in the real world.

I don't think a cyber-church is for everybody. In fact, I think my visits will probably be just occasional, but I can think of some examples where they'd be a huge blessing:

1. For people who are physically isolated.

2. For those with health problems who are unable to leave their homes.

3. As an outreach to various groups of people. You could have a traditional church, a contemporary one, a punk one, a goth one, churches for various ethnicities. Whatever. I think you will find the cost of building facilities in the cyber-world compares favorably with the cost of building in the real world.

4. As a meeting place for Christians in closed countries for whom it is dangerous - or too distant - to get together in person.

5. For a mid-week fellowship group.

6. As a place for fellowships begun in the real world to continue when people move away. For example, a college Christian group could maintain itself when everybody graduates.

For a good introduction to the concept of cyber churches, see the Living Sounds Web page by the pastor of the ALM CyberChurch. If you'd like to visit the church, you need to sign up for Second Life (a basic account is free) and download the special Second Life browser. When you've done that, you can go directly to the church by clicking here: secondlife://Vine/173/75 .
Posted by Brad at 4/02/2006 12:33:00 PM No comments: